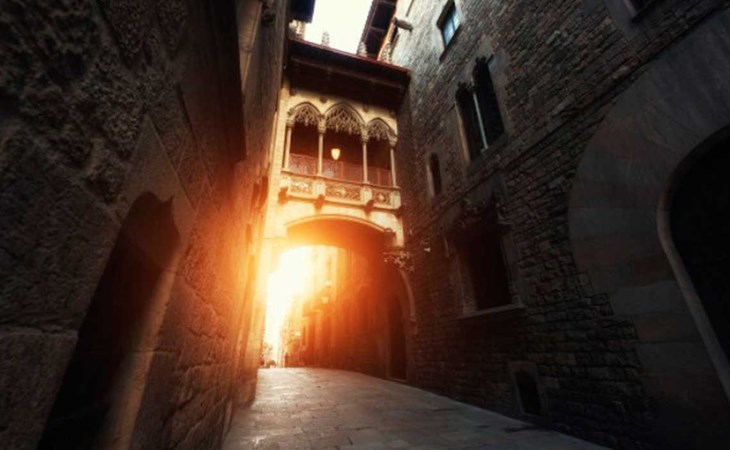 One of the great secrets of Barcelona, and where part of its magic resides, is its enormous variety of architectural styles built throughout the city. On foot, and in a matter of 20 minutes, you’ll find yourself marvelling at modernist, medieval or contemporary works.

In this post we bring you the best way to get to know Barcelona’s Gothic Quarter. The best choice is undoubtedly a walking route to discover all the secrets of this style.

Barcelona’s Gothic Quarter: what to see

You can start the tour in Las Ramblas, next to Plaça de Catalunya. One of the most touristic sites in the Catalan capital, and at the same time the gateway to the old part of the Gothic Quarter in Barcelona. In addition, it was a significant road in medieval times, as it was a torrent that channelled water to the sea and defined the limits of the old city.

Our itinerary will continue down Las Ramblas, to Carrer de Portaferrissa, where there is a ceramic decoration reminding us of what the wall was like in the Middle Ages. This was also one of the entrance gates to the walled medieval city.

The Gothic cathedrals of Barcelona

After this short historical introduction, we come to the main features of the Gothic style in Barcelona: its churches and cathedrals. Taking Carrer de Petritxol, you will arrive at Plaça del Pi, where you will find a beautiful Gothic church dedicated to the Virgin.

We continue our way through the Carrer de la Palla, which will take us to the most important Gothic work in the city, the Cathedral of Barcelona. Its visit cannot be ignored, but we recommend that you enter the cloister, to begin your tour of the oldest part of the temple and thus follow the chronological itinerary inside.

Essential nooks of the Gothic Quarter

After visiting the Cathedral, if you go straight ahead you will find Carrer de Sant Sever, a small street that will take you to one of the most magical corners of the entire city: Plaça de Sant Felip Neri. At this location one can still see one of the worst Francoist bombings during the Civil War.

This impressive visit will mark the beginning of the end of our tour. Returning to Carrer del Bisbe, and in the opposite direction to the Cathedral, you will find the Palau de la Generalitat, which preserves its original 15th-century Gothic façade. In the middle of the street there is also a beautiful Gothic-inspired bridge.

And to finish, you will arrive at what is considered the great centre of the city of Barcelona: Plaça Sant Jaume, where the main façade of both the Barcelona City Council and the Generalitat de Catalunya are located.

The façades facing the main square are not Gothic, but neoclassical. Another example of the contrast of architectural styles in the city.

Following the route through Barcelona’s Gothic Quarter is a must-see in the city! But the best thing to do is to stay at the Pere Tarrés Barcelona hostel, from where you will have access to any location in the city.