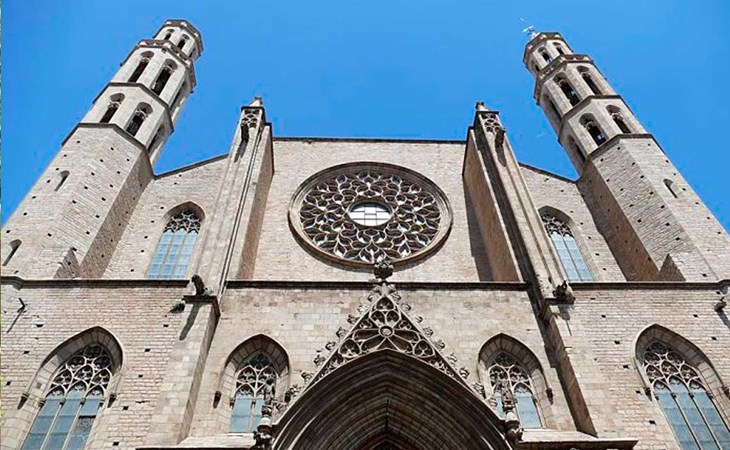 The Basílica of Santa Maria del Mar in Barcelona is architectural excellence, and with a great history, that does not have the same tourist thrust that other religious buildings of the Catalan capital, but it is of vital importance in the evolution of the territory.

Built between 1329 and 1383, this beautiful basilica is considered the best and most complete example of Catalan Gothic architecture, in addition to the great importance that was bestowed on it in its time, as this religious representation was built by parishioners, fishermen, workers (known as bastaixos) and the residents of La Ribera neighbourhood.

History marked by the attacks and their restoration

The authors of the project that gave life to the Basílica of Santa Maria del Mar were Berenguer de Montagut and Ramón Despuig. It is a church considered popular and of great importance to the people of the city, since it was financed by ship-owners and merchants, and a large part of the local population participated in its construction.

Even so, it should be noted that the image it presents today is the result of the restoration it has undergone in recent years, since different parts of the monument were destroyed because of the different wars that the city suffered. Specifically, one of its worst moments was the fire that anarchists and communists caused during the Civil War (1936), which destroyed the magnificent baroque altar and all the images and archives of the temple.

This fact is also the reason why the interior of the temple has a blackened aspect that only adds greater mystery and interest.

A jewel of Catalan Gothic

The Basílica of Santa Maria del Mar in Barcelona is considered the best and most complete example of Catalan Gothic architecture.

Outside you can see the peculiarities of this architectural style, such as straight lines and solid buttresses that give it a robust, compact appearance, very different from European Gothic cathedrals. The bell tower is octagonal and the doors are solid oak with iron decorations.

But, without a doubt, the main beauty of this temple is inside. The imposing structure has an interior with three naves, where the central one has great light capacity and its construction is based on the old ad quadraum technique. Composed of extensive bare and endless stone surfaces and slender palm-shaped columns harmoniously erect a connection between all its parts.

The combination of all these elements, the captivating magic of the basilica per se and its beautiful stories make it an example of the distinction in Europe in the Gothic era.

The architectural monument is located in the Gothic quarter. Specifically, its address is Plaza de Santa María, 1; and you can easily reach it with Line 4 of the subway, getting off at the Jaume I stop.

In addition, it should be noted that, although the entrance to the interior is free, there are different options at reduced prices to learn more about its architecture with the help of a guide; and access to the towers and terraces does carry a supplementary charge.

On the other hand, during summer sunsets there is also the option of visiting in very small groups to practically walk alone through the interior of Santa María del Mar. This special visit ends on the terraces of the monument, where you can contemplate the narrow alleys of Born, the main buildings of Ciutat Vella and an impressive 360º panoramic view of Barcelona when it gets dark.

Interesting, right? Well, it doesn’t end here, after planning the route through the Born area and walking through the most Gothic areas of the city, it is time to rest and the Pere Tarrés Barcelona hostel is perfect to discover all the secrets of the Basílica of Santa Maria del Mar in Barcelona, the great jewel of Catalan Gothic.